Leadership: YOU are not perfect, and that is just perfect

The premise is that the ideal executive does not exist. Our research indicates that there is no such thing as branding a person as an A, B, or Z type since the environment and context drive our behaviors. Great managers and leaders adapt, and their styles tend to change based on the challenge and the strength and weaknesses of other members of a team.

The Alder Koten Competency Model is based on key leadership and management roles and how these roles interact under different circumstances to predict an outcome. It identifies four fundamental roles that coexist and need to be performed to achieve a common goal.
These four roles can be applied to our personal or work lives, and they can be applied to an individual, an organization, government, or culture. For any task at hand we will Envision what it is that we need to do, Structure what needs to happen, Execute to get it done, and set the right elements in place in order to Sustain it. 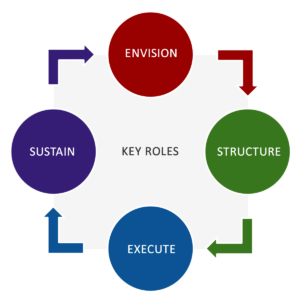 The way the roles interact is critical because while they are all required to coexist their nature is incompatible.

The Envision role requires us to think in the abstract, out of the box and focus on the long term. The focus allows us to look ahead, identify threats, and think about what is required to be effective in the future. The behaviour is conflicting with the Execute role that is the discipline of getting things done and requires a sharp focus on what is necessary to be effective now. As these two behaviours coexist they provide opposing forces: One focused on the long-term and the other on the short-term.

Without the opposing force, the strong Envision profile would only be a dreamer that never gets things done while the Execute profile would be living day-to-day in an endless reactive cycle.

The Structure and Sustain roles share a similar symbiosis. The Structure role provides an extremely systematic approach to be efficient in the short term. It is focused on planning, and establishing efficient procedures and structure. It forces ambiguity out to provide efficient and predictable management. In contrast, the Sustain role focuses on nurturing adaptability, and guaranteeing that systems remain diverse and productive over time. It challenges the rigidity of the Structure role to be efficient in the long-term. As these two behaviours coexist they provide opposing forces: One focused on leadership and the other on management.

The polarizing forces were addressed in the book “On Becoming a Leader,” by Warren Bennis as he outlines the key differences between the two roles:

These conflicting differences could be traced to physiology according to the left-brain, right-brain dominance theory, the right side of the brain is best at expressive and creative tasks (Envision – Sustain). The left-side of the brain is considered to be adept at tasks that involve logic, structure, and analytical thinking (Execute – Structure). Although a lateral dominance is measurable, both hemispheres contribute to both kinds of processes, and experimental evidence provides little support for correlating the structural differences between the sides with such broadly-defined functional differences.

Evidence in management and leadership suggest that while the nature of the roles is conflicting we are fully capable of switching from one role to another at any given point in time depending on what is required. However, given the conflicting nature, no one can excel at all of the roles at the same time, in every situation, and under every context. Anyone may excel in one or more roles, but if any one of these four roles is missing, or if one is overpowering, a pattern of mismanagement or misalignment may occur. Good leaders and good teams must seek a balance and be fully capable of performing each role.

Alder Koten helps shape organizations through a combination of research, executive search, cultural & leadership assessment, and other talent advisory services. Our recruiters and executive search consultants bring to the recruiting process an in-depth understanding of the market conditions and strategic talent issues faced by clients within their particular industry. Our leadership consultants provide advisory services that are crafted to be collaborative, responsive, pragmatic, and results oriented. Focused on expanding the capabilities of the organization through talent.