Every resume is a one-of-a-kind communication mechanism with both explicit and implicit messages. It should be appropriate to your situation and the story you want to tell.

Identify what you want your resume to do and convey before you get started. Put together the content once your target message is clear.

Here are 10 basic guidelines for building a high-impact executive resume. 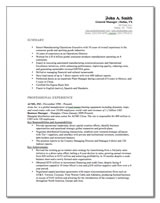 Avoid the adjectives and provide examples that will implicitly send the message.

Dates, titles, responsibilities and education are part of the explicit side of your story. But you won’t be successful if you attempt to explicitly convey leadership skills, behaviors, strategic thinking or other business and leadership competencies. Those need to be built into the implicit messages your resume must convey.

No one wants to hear you are a quick learner, a team leader or capable of working under pressure. Hiring managers want to see evidence when they are quickly reading your resume. If the right message is there, the implicit message will get across stronger than an explicit adjective.

If I did two tours of duty in Iraq defusing roadside bombs would I need to tell you that I work well under pressure? It might be an extreme example but not much different than the implicit message of strong leadership skills if I successfully managed the integration of a newly acquired company.

Stay away from getting creative and putting together a Power Point or an Excel based resume.

Resumes are still made and formatted for paper but most organizations, recruiters and executive search firms use customer relationship management (CRM) and applicant tracking systems (ATS) to store, search and manage your information as a potential candidate. Your resume needs to look good on paper but should also be cut-and-paste friendly and parser friendly to make it easy to incorporate into applicant tracking systems. Most importantly your resume needs to be easy to search for.

A parser is a tool that reads your resume, breaks down the information and automatically enters critical data such as name, phone, address and email into a CRM or applicant tracking system.

The harder it is for someone to enter your information into their system, the higher the likelihood of your resume ending up in a lost inbox or an untraceable directory in a hard drive.

Consider that the most common file format is Microsoft Word. Stay away from getting creative and putting together a PowerPoint resume or an Excel based resume. Avoid the fancy formatting, most notably tables, tabs and bullets that will distort if cut and paste is used to import your resume (tables are the least friendly of the bunch). Use universal fonts such as Arial or Times New Roman.

Most resume templates found in MS-Word are table based and designed to print well. Avoid those templates and start from scratch or use a template that is straight forward and simple.

Avoid the adjectives and provide examples that will implicitly send the message.

Make it easy for people to reach you and don’t complicate the formatting of your personal information. The best place for your personal information in a printed resume is the upper right corner. Think of a folder, stapled pages, or papers held together with a clip. Most of these bind or hold everything together on the upper left corner. We flip through pages holding them with our left hand and browse using our right hand. The most prominent and visible place when doing this is the upper right corner.

The correct format will take up the first 5 or 6 lines of the important paper real estate, but your personal information is critical.

Address
Use the standard address format that you would use to mail a letter. It is not fancy, and it may not be the coolest way to present it, but it will be the easiest to read by a resume parser. The most likely scenario is that nobody will try to reach you by regular mail, but the address and zip code are important when doing a regional search. It is worth repeating: Use your full address in the standard mailing format.

Phone
Include your home, cell phone and if possible your direct work number.

Consider the impact of the explicit messages your resume will send and the difference between [email protected] versus [email protected] or [email protected] I don’t want to mislead you into thinking a Hotmail or Yahoo address is not adequate. They are adequate and well accepted as a personal email address that will likely not change over the years.

Anti-discrimination laws have kept pictures away from resumes. An organization, headhunter, or a recruiting firm can’t legally request your picture and some may ask you to remove it to avoid discrimination related grey zones, but there is nothing that says you can’t include it if you feel comfortable doing so.

One of your primary objectives is to become memorable via your resume. People remember faces. If you are screened over the phone hiring managers will make an easier face-name-resume connection. There is value to putting a face to a name.

Having said this, don’t forget the explicit message and use an adequate headshot that will convey a professional and executive demeanor. Avoid a cropped party picture, scanning your diver’s license, or your passport. And please avoid that picture in a tux from last summer’s cruise or your cousin’s wedding. Use a picture that will reflect how you would dress and groom for an interview.

The professional objective is out. A well written summary is in.

Use this rule of thumb: If you looked at your printed resume the first half of the first page should include your personal information in the upper right corner and a well-written bullet style summary. This summary should have enough information and evidence to help a hiring manager decide if it’s worth their time to read the other ¾s of your resume that should include the details.

When someone finishes reading your summary they should have a clear idea of: What, when, where, how, and how long:

Here is a sample summary:

Put your experience into context.

Once you get to describe your experience it is important that you put it into context.

Put your experience into context when you describe it. Never assume that everyone will know the companies for which you have performed work. Include a brief summary of what they do, the industry, the total corporate revenue, the number of employees, and if applicable the revenue and size of the division for which you have performed work. The information will put the organization and your role into perspective.

When you describe your experience, use a reverse chronological order and include your exact title, responsibilities, accountabilities and achievements. It is important not to forget to put everything into the context of what, when, where, how, and how long.

Did I mention you must avoid the adjectives, focus on data driven evidence and be mindful of the implicit messages?

Here is an example:

ACME, INC. (November 1998 – Present)
Acme Inc. is a global manufacturer of road runner hunting equipment including dynamite, traps, and wood crates with over 10,000 employees worldwide and revenues of USD$ 1.2 billion.

Held positions in Engineering, Design and Quality with Anvil, Inc. and TNT Corp. from 1985 to 1993.

Notice how in the above example the current position uses the most paper real estate, roughly the equivalent of half a printed page. The following positions progressively use less and less space to the point of just including the title, location and dates.

As a rule of thumb, the first page should cover your personal information, a well-designed summary and the most relevant detail of what you have done in the past 3 to 5 years. Manage the space in the second page to include the rest of your experience and details of your education.

Degrees are important and should be included along with the institution and the year the degree was obtained. Space on your resume is precious real estate so leave everything other than degrees out, unless it is highly significant and relevant, such as a professional certification. Leave out self-improvement seminars that are focused on competencies that should be reflected in your achievements. Hiring managers won’t care much about you taking a seminar for negotiating skills if negotiating skills are not reflected in your accomplishments. If you want to highlight, your negotiating skills make sure it is part of the implicit message you send out within your responsibilities, accountabilities and accomplishments.

As you go through your resume make sure every year is accounted for, and you don’t have any gaps. Chronological coherence is one of the first things hiring managers look for and discrepancies or attempts to paint a different picture will get noticed. If you are not, transparent hiring managers will immediately assume you are hiding something or trying to cover something up.

Include everything from your graduation date or your first professional experience up to what you are doing today.

Yes, the file name is important. It won’t take you long, and it can make a difference.

Avoid generic names or your initials such as CV-PSK-Eng.doc and use a name that will help yourself and everyone that will handle your electronic resume with a file name such as CV-Peter_Smith-Operations-2011.doc

Alder Koten helps shape organizations through a combination of research, executive search, cultural & leadership assessment, and other talent advisory services. Our recruiters and executive search consultants bring to the recruiting process an in-depth understanding of the market conditions and strategic talent issues faced by clients within their particular industry. Our leadership consultants provide advisory services that are crafted to be collaborative, responsive, pragmatic, and results oriented. Focused on expanding the capabilities of the organization through talent.

Silvia Flores serves as Managing Partner of Brakston Grey, a division of Alder Koten that focuses on high potential professionals and managers on a development path for executive positions, and is a member of the firm’s maquiladora, and supply chain & operations practices.